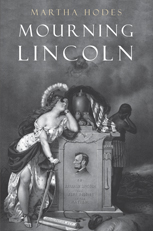 Public responses to Lincoln’s assassination have been well chronicled, but prize-winning historian Martha Hodes is the first to delve into personal and private responses–of African Americans and whites, Yankees and Confederates, men and women, soldiers and civilians, rich and poor–investigating the nation’s first presidential assassination on a human scale. Black freedom, the fate of former Confederates, and the future of the nation were at stake for everyone, whether they grieved or rejoiced when they heard the news. Drawing on a remarkable range of diaries, letters, and other contemporary documents, Mourning Lincoln reveals not a moment of unity and closure, but instead a deeply divided country on the eve of Reconstruction.

A True Story of Love, Race, and War in the Nineteenth Century

Illicit Sex in the Nineteenth-Century South

SEE BELOW FOR RADIO, TELEVISION, AND LIVE-STREAMED APPEARANCES

Martha Hodes is Professor of History at New York University, and has taught as a Fulbright scholar in Germany and as a Visiting Professor at Princeton University. In addition to Mourning Lincoln, she is the author of The Sea Captain’s Wife: A True Story of Love, Race, and War in the Nineteenth Century, and White Women, Black Men: Illicit Sex in the Nineteenth-Century South.